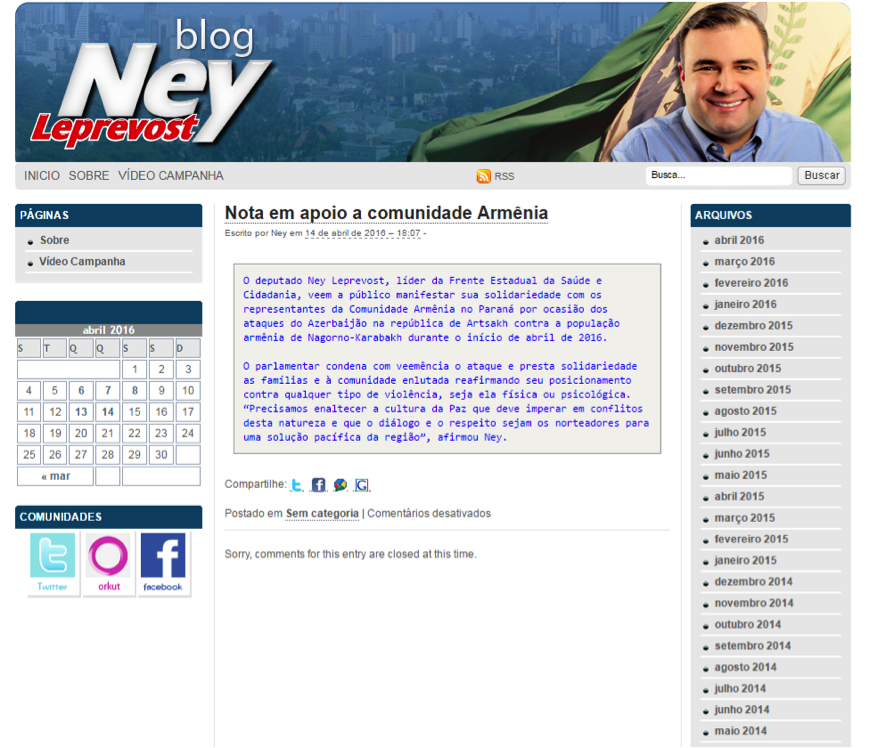 The State Deputy Ney Leprevost (PSD), published an official statement on his blog in support of Armenian community in Arstakh (Nagorno-Karabakh)

In note, the State Deputy Ney Leprevost condemned the aggressions perpetrated by Azerbaijan:

“We remember that in 2013 the law project of authorship of the State Deputy Ney Leprevost, recognizing the Armenian Genocide was signed by the Governor Beto Richa (son of José Richa, ex-governor with lebanese ascendancy) and entered in force on February 28th, 2013, also counting in the official calendar of events of the State of Paraná:

The Armenian community of Paraná and Brazil thanks the support of Deputy that one more time goes on defense of the Armenian people.”

Statement in support to the Armenian community

The State Deputy Ney Leprevost, lider of Front of Health and Citizenship of the State, comes in public to manifest his solidarity with the representants of the Armenian Community in Paraná in occasion of Azerbaijan’s attacks in the Republic of Artsakh against the armenian population of Nagorno-Karabakh in the beginning of April 2016.

The parliamentary condemned with vehemence the attack and provides his solidarity to the families and the bereaved community reafirming his position against any kind of violence whether physical or psychological.

“We must strengthen the culture of peace that must prevail in the conflicts of this nature and that dialogue and respect can be the guide for a peaceful solution in the region” affirmes Ney.